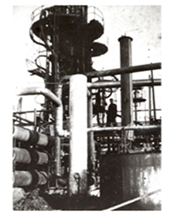 In 1932, fourteen acres of the former Port Credit Brick Yards property were sold to L.B. Lloyd of Lloyd's Tankers and the venture was known as the Lloyd Refineries Ltd. The goal? To erect "a modern refinery capable of handling 57,000 gallons of oil or 1,500 barrels daily." 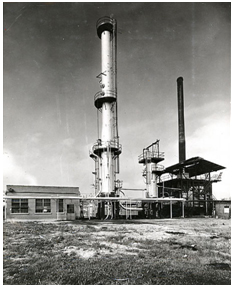 Lloyd began by installing a small crude (oil) Stilling Unit and 9 storage tanks on the site in 1932. At that time, the plant was capable of processing 300 barrels per day to produce gasoline and fuel oils. The plant manager was Mr. F.K. Davis from Texas.

In 1935 a Dubbs Thermal cracking unit was added which increased throughput to 3000 barrels per day. Construction work was done by local refinery personnel under the direction of Universal Oil Products of Chicago. 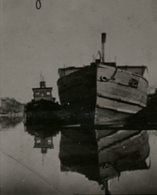 The crude oil that was processed at the Lloyd Refinery came from Toledo Ohio via Chicago. Lloyd operated three tankers that transported the crude up through the Welland Canal and across Lake Ontario to Port Credit. Tankers of that era were not self-propelled but were towed by tugboats. 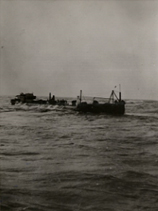 The Lloyd fleet of tanker vessels were named the Bruce Hudson, the Joan Virginia and the Roy K. Russel. They were pulled by their respective tugs; Ethel, Ajax and Muscallonge.

The Bruce Hudson turned over on one of its trips and had to be towed to Port Weller to be righted and then on to Port Credit for pump out and clean up. On another transit, her tug, Ethel, ran low on fuel oil and left Bruce adrift whereupon the S.S. Brulin came along and claimed the Bruce Hudson as salvage. Lloyds needed a court battle to reclaim her.

As if running a startup refining business were not headache enough, it seems that Mr. Lloyd was beset by many woes with shipping. The record suggests that the fledgling Lloyd Refinery suffered a variety of costly setbacks associated with its fleet.

In the fall of 1937 Roy K Russel ran aground in Godfrey's Bay just west of the refinery. Next spring, she was refloated only to be towed to Hamilton and scrapped.

Even the tug Ajax sank in harbor.

Only the Joan Virginia got through those years without a major incident.